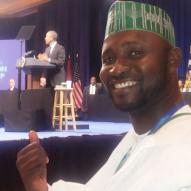 Counterfeit drugs are a global health imperative impacting developed and developing countries. In many countries, including Nigeria, a considerable challenge is the open-air drug market where the bulk of fake drugs are distributed.

To better understand the scope of this problem in one country (Nigeria), we spoke with Dr. Ashiru Abubakar, a physician from Nigeria, who completed an eight-week internship at USP from August 1st to September 26th, 2014.

USP was very pleased to host one of the Mandela Washington Fellows at its Headquarters. Dr. Abubakar was involved in researching and evaluating the drug supply chain in Nigeria, with a special focus on the National Drug Distribution Guideline (NDDG), published in 2012 with the goal of establishing a well-ordered drug distribution system for Nigeria.

What kind of work you do in Nigeria?

Thank you very much for interviewing me - it’s an honor to have this discussion. Back in Nigeria, I’m a physician with a specific interest in public health.

Apart from my clinical work, I’m also engaged in community activities, working closely with different community-based organizations and civil society organizations to promote accessibility to maternal-child healthcare services in rural communities, and to provide care and support to orphans and vulnerable children. I also work closely with government agencies in monitoring and tracking state health budgets in a bid to promote accountability in governance.

Talk about the project you’ve been working on during your eight-week internship at USP. What are some of the eye-opening insights you’ve uncovered?

USP has been a new experience for me because I’m a physician, yet most of the work USP does is related to pharmacy. So I jumped into a new field, of which I knew little about.

The specific area of focus for my internship was Nigeria’s drug supply chain, and in particular on the National Drug Distribution Guideline (NDDG). This guideline was drafted in 2012 for the purpose of establishing an ordered and effective supply chain in Nigeria. It was supposed to be implemented in July 2014, but for some reason the government postponed its implementation until July 2015.

We were curious about the delay. We decided that we needed to reach out to stakeholders at the grassroots to find out what they know about the situation. We wanted to know why some stakeholders – who are said to have been included during the drafting process – were not keen on its implementation.

Knowing that the goal of the guideline is noble, and that its implementation means all open drug markets in Nigeria will be shut down, which is a tremendous benefit to the Nigerian public, “Why,” we wondered, “are some stakeholders not keen on it”?

And that’s what led us to doing some research, trying to figure out whether there are vulnerabilities involved, and then try to offer some recommendations for successful implementation in 2015.

What are some key challenges in Nigeria’s drug supply chain system and how will your research here at USP help to resolve them?

Structural challenges are those grey areas where the guideline is vague, and doesn’t provide complete definitions about important issues such as the distribution channels, pricing of drugs and so on.

Stakeholders also have reservations about the intentions of the government with respect to the guideline. They’re unhappy that consultations done during the development of the guideline were too high-level and that those who operate the drug market were not involved in the process. They feel the guideline recommendations are only going to serve the powerful few in the pharmaceutical industry and not benefit them at any point.

Some stakeholders also feel that promises made to them by the Federal government of Nigeria should serve as the baseline for the guideline. For example:

USP has a strategic role to play in making this guideline work. You have quite an interesting relationship with some of the regulatory agencies, as well as the Federal government of Nigeria, and so I think the first step is to help bring all stakeholders back to the table, to continue the discussion regarding this guideline.

So you believe USP has an important role to play in facilitating these conversations?

Sure. And aside from that, USP could continue to provide quality monitoring of our manufacturers, provide them access to sources of APIs and thereby encourage and boost their morale by explaining that they need to come on board to protect their product and their reputation.

If that happens, the war against counterfeit medicines will be successful. And if the quality of medication were improved, this would boost confidence in the federal government of Nigeria as far as procuring pharmaceutical products from them.

That would naturally boost their revenue generation and that would boost their production capacity. Because at present, only 40% of the drugs consumed in Nigeria are internally generated. About 60% are imported. If the government would start to procure medications from our local manufacturers, that would boost the market, improve their capacity, gradually we’d be able to overcome the challenges.

Another thing is that USP needs to diversify its contacts in Nigeria. While the National Agency for Food and Drug Administration and Control (NAFDAC) and the federal government are doing an excellent job within their limited capacity, I believe USP should collaborate with civil society organizations, professional groups in the pharmaceutical industry, and institutions, to boost capacity, to bring everyone on board in creating awareness about the dangers of counterfeit drugs and why they need to be taken out of the market. All while trying to educate the consumer who is at the receiving end of all these challenges.

When you go back home and pick up your clinical practice where you left off, how will your experience here have impacted you, both personally and professionally?

As I told you, being here at USP has been an adventure. However I don’t think my experiences will contribute much to my own profession. But as an aspiring public health physician, I believe I have a role to play in every field relating to health – and that’s my driving force for doing what I did here. I feel the need to give back to Nigeria some of the things I have learned for the overall benefit of the population.

For now, I’m still trying to figure out how to channel some of these findings. I know we have an incredible network via YALI. Even if it’s something as little as generating awareness about counterfeit medicines, and trying to see how to disseminate this knowledge to the larger community – these are some of the things I intend to do.

As for my experience in the U.S. generally, I’ve come to realize that as Africans, and Nigerians in particular, we do not have a monopoly of problems. Problems are everywhere, but how you tackle the problem is what matters. And this is my takeaway. It’s time to start talking about our strengths rather than our weaknesses – focusing on weaknesses as a daily conversation will not solve the problem.

What surprised or intrigued you the most about USP’s culture?

The most striking thing about USP as an organization is the working environment. There is relationship and humanity within the workforce.

I’ve interacted with lots of my colleagues who are interning in different parts of the U.S. and they’ll tell you that the interaction among staff within the corporate environment is poor. People don’t greet one another, they don’t chat, and they don’t tell jokes. But it’s a completely different world here at USP – from the CEO to the janitor and everybody in between – You see those happy, welcoming faces. And every now and then people complement you and I think that’s what I appreciated most about USP. This is the most incredible resource that USP has, and you should keep it up.

Learn more about how USP reaches out and helps improve the health of global communities.

**Disclaimer: The views expressed in this interview are those of Dr. Ashiru and not necessarily those of USP.

Since the start of the pandemic, the U.S. government has allocated over $34 billon to improve U.S. medicines supply chain resilience.