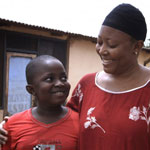 When discussing counterfeit and substandard medicines, it can be easy to focus on sweeping statistics and large numbers:  an estimated 700,000 annual deaths linked to fake malaria and tuberculosis medicines alone, and marketplaces where the volume of fake drugs can range from 1% (in the US and other industrialized countries), to approximately 10% in the global marketplace; 30% in some parts of Asia, Africa and Latin America; and 50% or more of medicines purchased from some Internet sites.

Those figures are staggering, but they are also faceless and so seemingly distant that it can be difficult to understand that the simple act of purchasing medicine can be a life-or-death decision for so many people.  To help illustrate the true threat, and demonstrate why USP and so many other organizations are working to improve drug quality, we offer this first-hand experience from Ghana:

The day Victoria Amponsah was diagnosed with malaria she also learned that she was two months pregnant. She left the hospital with a prescription for an anti-malarial drug and, like patients anywhere else in the world, went to a local pharmacy – believing that the medicine she purchased would treat her condition. Victoria bought what she thought was a genuine, effective drug, but that was not the case. Her condition quickly worsened and within hours she was admitted to the hospital, learning later that she had been sold counterfeit pills.

Fortunately, Victoria and her baby survived the trauma and successfully fought off malaria, but this would not be her only personal encounter with fake medicine. In her seventh month of a healthy pregnancy, she was deceived by a fake version of a basic painkiller, disguised in an official-looking package. Within thirty minutes of taking the pill, Victoria started sweating, shaking, vomiting and bleeding. She was in the hospital for two days, nearly lost her baby and had to return to the hospital every week after the incident.

The Threat of Counterfeits

Victoria learned the hard way that fake medicine can threaten your health or even claim your life. But not everyone is as lucky.

“I am hoping that globally people understand that our lives are important than the little money they will make out of bringing a fake drug out.  [I hope] people will understand that it's not all about money.  It's about life. [T]he smallest thing, like just a tiny drug which is bad can cause so much damage in one's life.” – Victoria Amponsah

How You Can Help

Watch this video to hear more about Victoria’s story and learn how to be part of the solution.

In the fall of 2013, a growing list of international healthcare groups, research institutes, foundations, non-profit groups and private sector organizations began working together on an initiative called “Fight the Fakes,” aimed at raising awareness about the dangers of fake medicines – counterfeit and substandard products that hold out the promise of treating disease and improving health, but which may cruelly generate the opposite result, compounding illnesses or claiming lives.

We encourage you to join the online conversation at @FightTheFakes to add your voice those who are working to combat this problem around the world.

World standards day (WSD) is celebrated in October each year to recognize the thousands of scientists and other experts around the world who develop standards that impact every aspect of our daily lives.